We use cookies to deliver the best possible web experience. By continuing and using the site, including by remaining on the landing page, you consent to the use of cookies. If you wish to disable them, please take a look at our Cookies Policy. Please note that parts of the site may not function correctly if you disable all cookies. WE LOVE COOKIES!!

In its fifth year of existence, Africa’s biggest music platform — Coke Studio Africa — has achieved a key milestone in driving digital consumer interaction. The Coke Studio Africa YouTube channel has received the YouTube Silver Creator Award in recognition of its achievement of more than 100,000 subscribers on the channel.

A message from Susan Wojcicki, YouTube CEO, stated, “You’ve just done something that very few YouTube creators accomplish. You achieved a milestone with hard work, perseverance, and probably a healthy sense of humour, too,” adding, “What you’ve accomplished can’t be taken away from you. And we’d like to recognize you and all your hard work with this award, a small token of our esteem and respect.”

The role of Coke Studio Africa’s YouTube channel has been to extend the TV reach of the show by providing audiences with music content on demand. As such, the channel actively managed to distribute music content across Africa and beyond, with over 90 million views from South Africa, Nigeria, Kenya, Ghana, and as far as USA, United Kingdom, United Arab Emirates amounting to 179,527,578 minutes of watch time.

Upon receiving the award, Coke Studio Africa Digital Lead, Waithera Kabiru, stated, “Getting to this milestone of 100,000 subscribers on the YouTube channel speaks volumes about the demand for quality local content in sub-Saharan Africa. The Coke Studio Africa YouTube channel has enabled us to do what no other medium can, and that is to reach thousands of audiences across the world to share the amazing content that is created on Coke Studio. We are taking Africa to the World!” 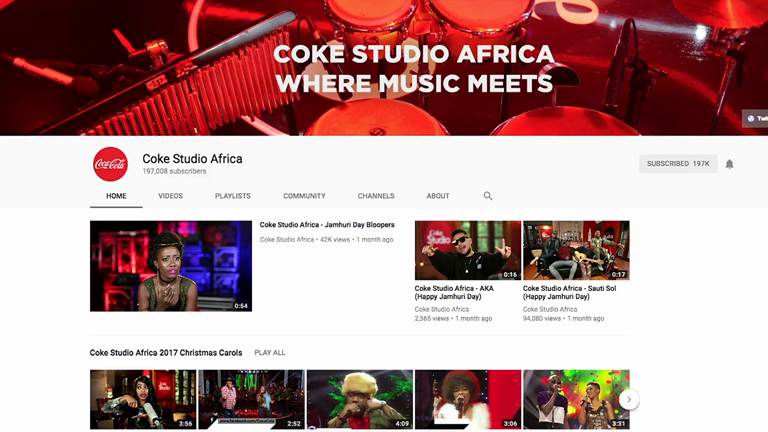 Susan further stated, “We know that you don’t do this for reward. You do it because you have a drive to create and share, because you have found an audience who cares.” She expressed optimism in the growth potential of the Coke Studio Africa YouTube channel, stating, “Believe us when we say we can’t wait to see what you do next. A million subscribers may seem a long way off right now, but you are closer than you think. And we are rooting for you.”

This award comes as a validation of Coca-Cola’s continuous efforts to embrace the digital evolution. Receiving the recognition from YouTube is indeed an honour and an inspiration for other content creators on the continent to engage audiences on the digital space.

Coke Studio aims to inspire and introduce Africa’s music talents to a new and wider audience through interaction, collaboration, and cooperation amongst musical artists while also building a strong brand connection with Africa’s young and growing population who are rapidly joining the ranks of digital natives.

Several successful collaborations between African artists have been born through Coke Studio.

The Coke Studio Africa original hit single “SAID” featuring Nasty C (South Africa) and Runtown (Nigeria), and produced by Shado Chris (Ivory Coast), is one of these successes. This collaborated track reached over two million views on YouTube in just a few weeks.